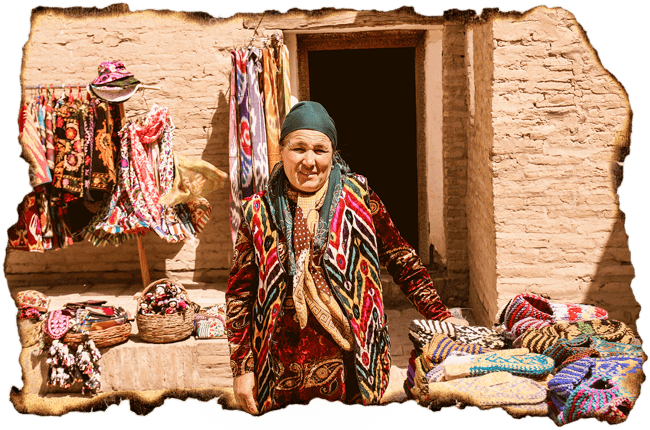 Day 1: Tashkent
Today you will arrive to the airport to have Uzbekistan tour 6 where our guide will meet and accompany you to have a guided city tour. You will explore the capital of Uzbekistan with the help of the most prominent sights of it. You will visit the famous main square that is known as the Independence square. It was erected as a symbol of victory over fascism in World War II. After it you will have a walk in the street that is known as a local Broadway where you can find a lot of interesting goods. In addition you will learn that this street divides the Independence square and Amir Timur square. Later on you will visit the famous among world for its beauty the Tashkent metro, which first line was opened in the 1977. Then you will be transferred to the old part of the city where you can see Chorsu Bazaar, Kukaldash Madrasah and Hast Imam complex that consists of several madrasahs, mosques and mausoleum. The most interesting part of it is the the world's oldest Quran copy dating back to 8th c. Quran belonged to Othman Ibn Affan, the Third Caliph. Othman was killed by non-muslims in 8th century. His blood spred over the Quran even now you can see it. Night is in a hotel.
Day 2: Tashkent - Urgench - Khiva (morning flight)
In course of the tour you will have a flight to the Urgench and further transfer to Khiva. In course of the travel you will explore the oldest city of the country. It is known as an inner city of Khiva or Ichan-Qala. This wonderful site is encircled by strong wall and inside of it you will have an opportunity to witness the remains of centuries old sound buildings, palaces, mosques, Madrasahs, Mausoleums, Minarets, Caravan-Sarais and Bathhouses all of it made Ichan-Qala unique city-monument. You will be impressed by the great number of traditional dwelling houses and about 60 architectural monuments. It is worthy to note that it became a historical and architectural conservation area in 1969. The most remarkable sites in it are the Kunya-Ark fortress dating back to 17th century, found by Muhammad Arang Khan, Kalta Minor minaret and Tash Khouvli palace, an incredible sample of Khorezm architectural mastership of 1830s. The tours to Uzbekistan are known as very interesting.   Night is in a hotel.
Day 3: Khiva - Shavat
Transfer to Shavat border (60 km).

Service does not include:
- Visa
- Full board
- Travel insurance
- English speaking guide
- Entrances to all museums
- Flight tickets Tashkent - Urgench