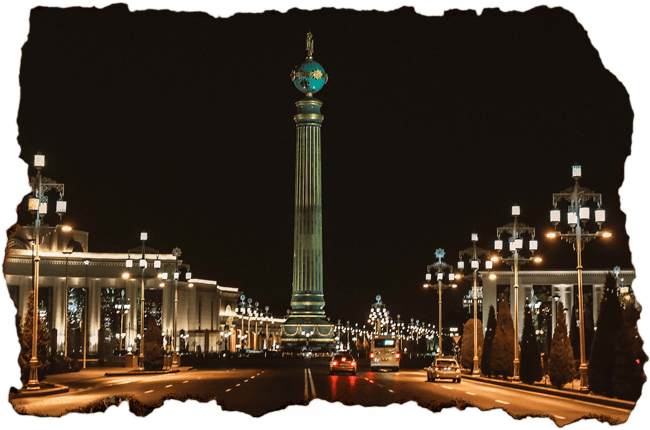 Day 1: Ashgabat
We are glad to see you on Turkmenistan tour 6. On arrival, you will have to explore the city. Visit parks and monuments, sacred mosque and other places of interest. In the afternoon, you will visit "Old Nisa" as the Sanctuary of Parhian Kings (UNESCO site), then to "Gypjak" Mosque and Mausoleumof the late President of Turkmenistan. Our tours will impress you. Night is in a hotel.
Day 2: Ashgabat - Awaza
Today you will have a domestic flight to the Turkmenbashy province. On arrival to the Turkmenbashy domestic airport you will drive to the Avaza and see the resort on the eastern coast of the Caspian Sea located in Avazian district, Balkan province 12 kilometers away from city Turkmenbashi (earlier Krasnovodsk). Avaza means "the shore of the singing waves". You will be impressed by almost 30 kilometers of crystal clear sand coast, over-the-top sun, and warm sea in summer. Transfer to hotel for rest.
Day 3: Awaza - Ashgabat
In the morning, you will have flight to the Ashgabat city. On arrival, visit ancient Nisa, the capital city of ancient Parthian state of the 1,000 B.C. and 1,000 A D. then we will drive to the Russian market. The Russian Bazaar or Gulistan is one of the main and oldest place in the Turkmenistan, located in the center of the city. The Russian Bazaar was built in the 1972-1982 by the enterprise of the Russian architect Vladimir Visotin amid other buildings that were included in the "Ashgabat Reconstruction Program of 1970-1980. It was built in the Soviet Modernism style and ornamented by the Turkmen sculptor Klych Yarmamedov who revered the building with a wonderful sculpture located in one of the building's corners. In 2001 it was rebuilt by the Turkish company Ekol, with efficient outlets, shops and food stands. The place was enclosed with white marble. Rest is in a hotel. We hope you like tours!
Day 4: Flight
In the morning is transfer to the airport. End of Turkmenistan tour 6.