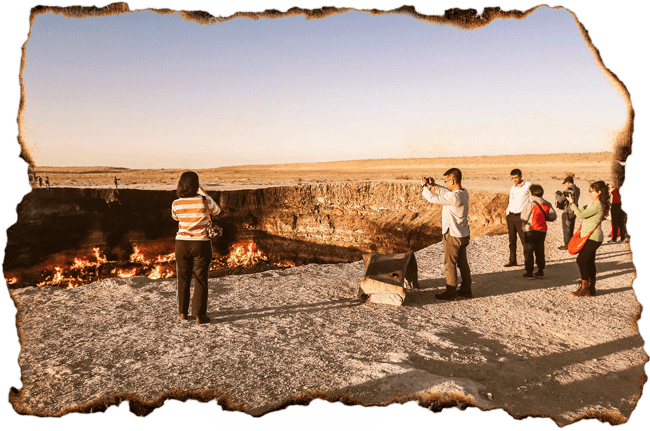 
You will be met by the local guide at the Ashgabat International Airport and transfer to the hotel. Meet Turkmenistan tour 5. In the afternoon, you will visit parks and monuments, imposing mosque and other interesting buildings. Then we will visit "Old Nisa" which defined to be The Sanctuary of  Parhian Kings (UNESCO site), remain with "Gypjak" Mosque and Mausoleum of the late President of Turkmenistan. Night is in a hotel.
Day 2: Ashgabat - Darwaza
The tour will start by visiting the Ertugrul Gazi Mosque, placed in the heart of Ashgabat, in Azadi street in the 90-s of the XX century. The tour will be continued to the Russian Bazaar or Gulistan. It is one of the largest and oldest markets in the Turkmenistan. Afterwards, you will travel to the Darvaza. In 1971 in the Karakum desert, near the Darvaza village is translated from Turkmen as ‘gate', Soviet geologists ongoing to bit at the site where they appointed into a hollow filled with natural gas. Throughout the boring an accident happened, gear and transport fell down in a big hole. No one was incapacitated, but there was gas coming out of the hole. Dreading that the hole would main to the release of poisonous gases, the group decided to burn it off. It was expected that the fire would use all the fuel in few days, but weeks, months and years passed, and it is still burning nowadays. We are sure you will like it on tours. Night is in tent.
Day 3: Darwaza - Kune Urgench - Shawat border
In the morning, you will drive to the Dashoguz region, located in the northern part of Turkmenistan. You will see the ancient Kone-Urgench. In past times, it was the capital of the great Khorezm Empire. Urgench is specified in the history of Central Asia with gold letters. In the end of the 10th century Urgench was the capital of Khorezmshakh state which engaged the whole area of the Amu Darya channel in northern Turkmenistan and western Uzbekistan. On arrival to Dashoguz city, you will have rest. In the afternoon, you will travel to the Shavat border. We hope you satisfied by Turkmenistan tour 5.